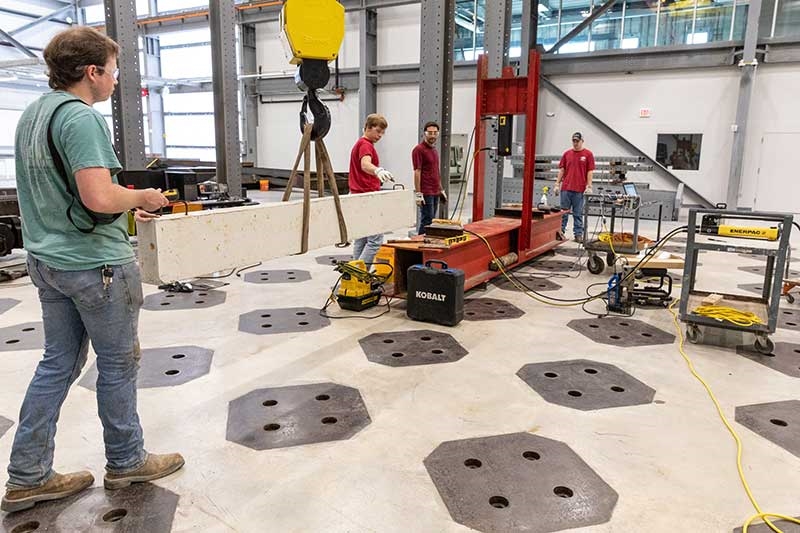 Civil Engineering and the Science of Destruction
I was always into Legos,” assistant professor of civil engineering Cameron Murray explains as four graduate students rig an 800-pound concrete beam with sensors. “A lot of engineers were. Eventually, my dad suggested I get into engineering. So I took a class in structural engineering and really enjoyed how practical it was — discovering what factors contributed to failure.”

Failure. That’s the goal of today’s enterprise at the new Grady E. Harvell Civil Engineering Research and Education Center — or CEREC — in the Arkansas Research and Technology Park. Under Murray’s watchful eye, Caleb Chesnut, a master’s student in civil engineering at the University of Arkansas, is going to break two concrete beams with a hydraulic ram. The beams are made of rapid setting concrete — known as high early strength concrete in the industry — though they’ve been curing for a year. The team is interested in several things: how does rapid setting cement, which has only been around since the 1970’s, compare to the industry-standard portland cement, which has been around since 1824? Specifically, at what point does shear failure occur and is there much difference between the two cements? Also, do they produce comparable values after at a week, a month, a year?
Read More
news.uark.edu