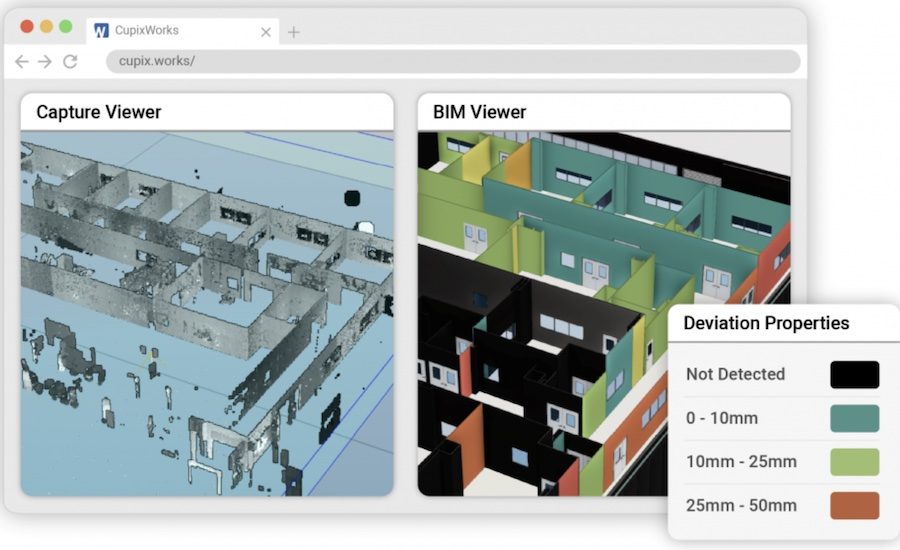 Cupix Adds Work Progress Tracking to Its Digital Twin Platform
As more images and reality captures come in from jobsites, the work of blending that data with existing digital twins can be onerous. Cupix, the maker of a digital twin platform for builders and operators, is adding Site Insights, a tracking feature that can check work put-in-place against the existing BIM.

“We can take any point cloud data, 360° image capture data, and dump it all into the BIM and see where the deviation is detected,” explains Simon Bae, founder and CEO of Cupix. The company offers its own proprietary 360° camera for site walks and documentation, but Bae maintains he wants the platform to be hardware agnostic.

“Our digital twin approach isn’t just 3D; we should have real-world sensor data, point cloud captures,” he says. Bae sees Cupix as an aggregator of project data for greater insights. “We have a grand plan, not just for progress tracking, but to provide a predictive model. Once we have enough data, we get that critical mass where we can do prediction and give you advice.”

Cupix has been expanding its platform and its customer base in the U.S. over the past year. Founded in Seoul, South Korea, Cupix has branched well beyond its original work in residential construction into working with large contractors in commercial construction. The digital twins generated by Cupix are also being used by retail chains and oil and gas operators to oversee their internal improvements and maintenance.

Bae says that the distinction between a construction digital twin and an operational digital twin is fading away. “We’re trying to get over some of the information silos between construction and after construction—streamline that information,” Bae says. “That way, when you have a new renovation project, you can just pull up the last time you used the model.”
Read More
www.enr.com

What is BIM, And How Are Digital Twins Changing the Game?