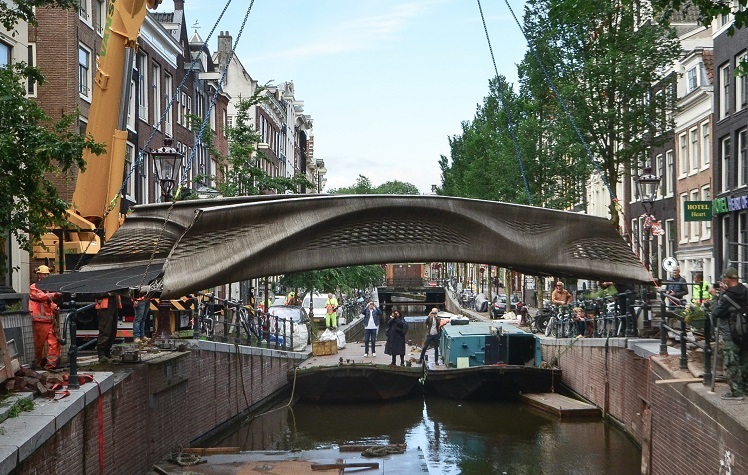 World’s First 3D-printed Bridge is a ‘Living Laboratory’
The center of Amsterdam is now home to a nearly 40-foot-long 3D-printed pedestrian bridge that took over four years to complete. It is the first such bridge in the world, setting it up to be a prime example of 3D-printed construction in the future—especially since the bridge is equipped with a network of sensors that will monitor it in real-time.

The bridge opened earlier this month, with Queen Máxima of the Netherlands the first to walk across it.

“A 3D-printed metal structure large and strong enough to handle pedestrian traffic has never been constructed before,” said Leroy Gardner, professor of civil and environmental engineering at Imperial College London and co-contributor on the project. “We have tested and simulated the structure and its components throughout the printing process and upon its completion, and it’s fantastic to see it finally open to the public.”

Being the first such bridge, there were no structural designs or blueprints to pull from. Instead, researchers relied on physical testing and computer simulations to ensure the safety of the 3D printed structures.