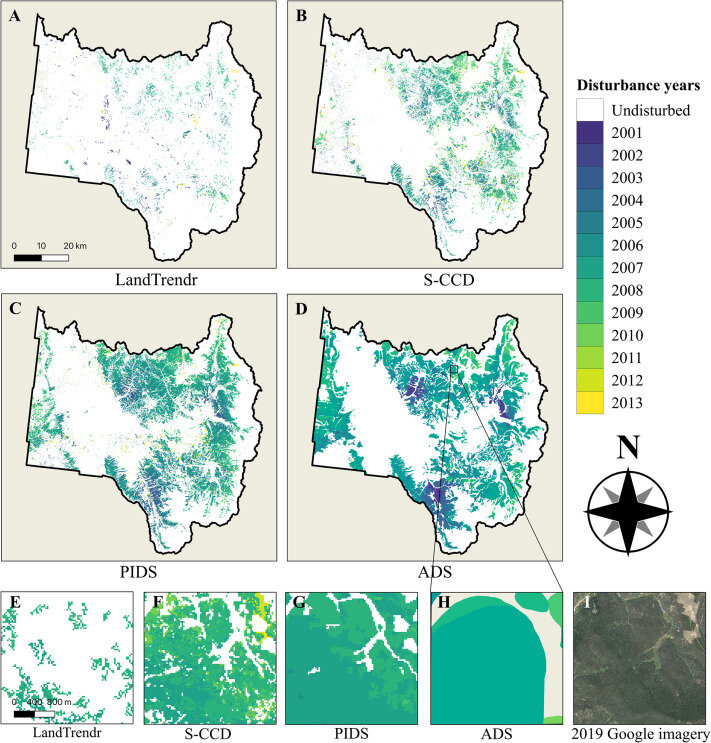 Fine-tuning remote sensing to protect forests from the spread of dangerous insect infestations
Invasive insects, fungi, or other pathogens can sweep through entire regions with deadly effect, devastating forests and causing ripple effects throughout the ecosystem. It happened here in Connecticut early in the 20th century, when 80 to 90% of the forest canopy was wiped out by the Chestnut Blight in some areas. When it comes to preventing such drastic land conversions over huge expanses of land, tracking the changes and catching the problem early is key.

The researchers focused on two examples, one in Connecticut and another in Colorado.

Zhu says factors that result in land change aren’t always as stark as land conversion—for instance from forest to grassland—but can still be dramatic owing to the interconnectedness of foodwebs and ecosystems, and remote sensing technology, like satellites, can help shed new light on these processes.

Satellites monitor landscapes and collect images that can be used to track changes over time, a task that may not be possible to undertake from ground level alone. Landsat is one example that scans the landscapes of Earth every eight days with two satellites, and the researchers are hoping to use this data to monitor the health of forests and so forest managers can act quickly catch infestations of destructive pests before it is too late.

Ye was the lead author on a recent publication looking at mountain pine beetle and spruce beetle infestations of pine trees in Colorado where he collected data on the ground in forests suffering from infestations.

Ye says by the time the signs are visible and it is clear that land change is imminent, it is too late to intervene.

“The signal happens mostly in short-infrared bands, therefore we have to rely on remote sensing measurements like Landsat to detect the signal,” Ye says. “If we can detect these subtle signals at an early stage and have early warnings for these potentially forest change in future, then maybe we can apply some forest management in a timely manner. For instance, infected trees can be removed to stop the expansion of beetles to some degree.”

In Landsat data, each pixel represents an area measuring 30 meters by 30 meters, making the detection of subtle signals tricky.

“There can be a lot going on within a square meter. It may include infested trees next to healthy trees, and the understory or other land cover. The signals can be diluted, so that makes the already subtle signal even subtler,” says Ye.

“I make a metaphor to describe this subtle change detection,” says Zhu. “It’s like you’re in a very noisy restaurant and someone’s calling your name, you want to hear it, but other voices are at about the similar volume. How can we detect anything when everything is similar as this change signal?”

With so much data to evaluate, researchers turn to algorithms, namely one called CCDC, which is becoming a standard for Landsat time series analysis. However, the team notes CCDC has limitations. To address the limitations, the team sought to develop a more tailored approach.

“CCDC is the acronym for Continuous Landcover Classification and Change Detection and has been used by a number of agencies,” says Zhu. “For one location—a single pixel—we can get dense time series observations with thousands of observations. We do a lot of preprocessing to remove cloud clouds, shadow, and snow and ice, we try to get a free, clear surface.”

The CCDC framework allows researchers to capture change over a period of time in a more generic way, and wells work for detecting abrupt land cover changes, Zhu says, “But if you want to capture subtle change, CCDC is not very good.”

Ye paired the data he collected on the ground to the archive of Landsat data from the same location, and developed a method called PIDS, or Parameter optimization, Index selection, Dynamic stratified monitoring, and Spatial consideration. In this case, Ye included specific details about the infestation stage and how the color of the pine and spruce needles changes over time after infection. Aerial Detection Survey (ADS) maps are also produced annually from aerial, manual sketch mapping.

“PIDS is a framework to adapt CCDC to detect very user-targeted specific change,” Ye explains. “The framework lets the user specify their training samples for turning model parameters, as if we focus on the subtle change, we need to adjust our model parameters to capture the weak signals.”

By applying PIDS parameters, Ye says the researchers were able to detect signals of beetle infestation in the transition between two very subtle stages of infection where needles begin to change color, roughly one year after the beetle start to attack the trees—a marked improvement in sensitivity over the standard CCDC approach. The PIDS result shows high agreement with the ADS map, showing the time-series approaches such as PIDS/CCDC is much more economically effective and are able to provide near real-time updates on the disturbance progression.

“PIDS is so good,” Zhu says. “If you see the differences between PIDS and CCDC, PIDS is much better for those subtle change detections.”

Kexin Song’s research is to detect forest disturbance in Connecticut, focusing on the non-native and soon to be re-named gypsy moth, Lymantria dispar dispar.

“A major infestation happened in 2016 and especially in 2017 in Connecticut,” Song explains. Applying the current framework to the gypsy moth infestation presents some challenges because the time between emergence of the caterpillar, the defoliation as the caterpillars feed on the trees, and re-foliation happens quickly so, which requires the remote sensing algorithm to pick up subtle changes in a narrower time frame.

“It is over a two-month period and to detect that is really, really tough and the time series characteristic is important. I am investigating how the time series such as spatial-temporal resolution and the structurally different spectral combinations can affect our detection of the moth infestation,” says Song.

Zhu explains another complication in that although the trees may survive, the stress they endure greatly weakens the trees. Weak trees are less resilient against storms, and that can spell trouble.

Song’s Ph.D. research is a part of the Stormwise Project funded by Eversource, aimed at improving vegetation management to avoid power disruptions. Through her studies so far, Song says that it is exciting to see how open access satellite data can be so beneficial to so many. Song hopes to one day expand her research into the detection and monitoring of other pests in our region, like the Emerald Ash Borer.

“Remote sensing cannot directly do the decision making about the landscape and conversation, but as we are able to do it more near real-time, and at large-scale, this information can help with decisions and options. Forest management policy has shifted from the replacement or harvest of forest to maintaining good, healthy trees in their current condition. Now that we can apply detailed information about subtle change in the forest degradation with this information, we can try to reach out to see how this information can change people’s minds about management. It is important, and we’ll keep doing this work.”
Read More
phys.org