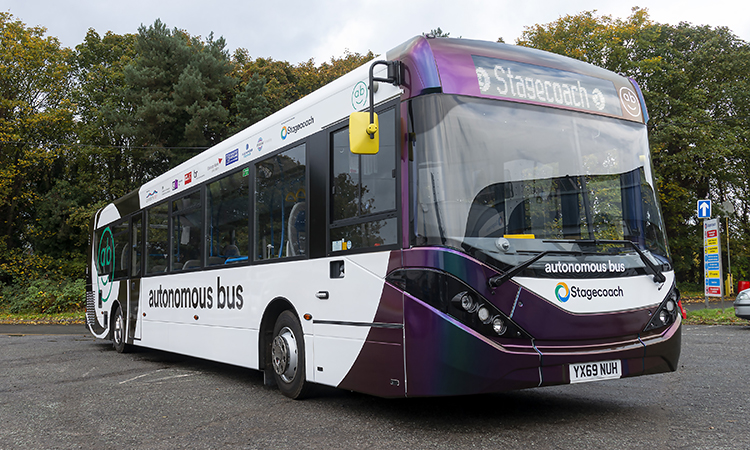 Stagecoach – in partnership with Fusion Processing, Alexander Dennis and Transport Scotland – has revealed the first glimpse of the new special livery for the autonomous bus project, CAVForth, that will be launching in Scotland in 2022.

It is the next key milestone in the exciting trial, which will see the first full-sized autonomous buses running on UK roads for the first time in 2022. The new service will be made up of four single-decker buses running a 14-mile route, including crossing the iconic Forth Road Bridge. It will provide capacity for up to 10,000 passengers a week, connecting Fife’s Ferrytoll Park & Ride with Edinburgh Park’s transport hub, and is expected to be popular with commuters, students, day-tripper, tourists and novelty riders, who are keen to be the first to say that they have been driven by a computer.

The new service will make it easy for people to switch to public transport by providing a brand new bus route in the heart of East Scotland. It comes on the back of the COP26 climate change summit, where Stagecoach said that the fastest way to make progress towards the UK’s net zero ambitions is by people switching from making car journeys and instead travelling by public transport, cycling or walking.

The four buses, which will feature the special new livery, are currently being fitted out with the ground-breaking sensor and control technology that allows them to become computer-driven. The vehicles are also being put through their paces with an array of virtual and track testing to ensure that all systems are functioning as expected before on-road testing begins later in 2021.

The colours and design were chosen through consultation with local communities, and a decision was made to ensure that the vehicles stand out on the road. The ‘AB’ logo stands for autonomous bus and is an icon that Stagecoach hopes to see become a standard identifier of autonomous vehicles in the future.
Read More
www.intelligenttransport.com

Uber to celebrate one billion trips made in the UK