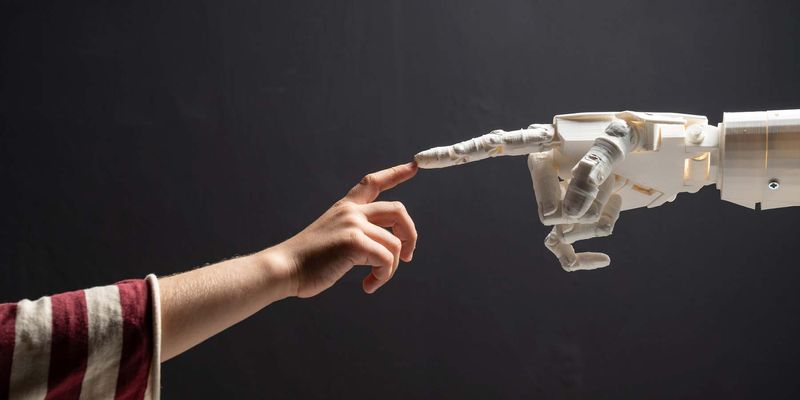 Stretchable Pressure Sensor Could Lead to Better Robotics, Prosthetics
The new pressure sensor can be stretched up to 50 percent while maintaining almost the same sensing performance

In the future, soft robotic hands with advanced sensors could help diagnose and care for patients or act as more lifelike prostheses.

But one roadblock to encoding soft robotic hands with human-like sensing capabilities and dexterity has been the stretchability of pressure sensors. Although pressure sensors—needed for a robotic hand to grasp and pick up an object, or even take a pulse from a wrist—have been able to bend or stretch, their performance has been significantly affected by such movement.

Researchers at the Pritzker School of Molecular Engineering (PME) at the University of Chicago have found a way to address this issue and have designed a new pressure sensor that can be stretched up to 50 percent while maintaining almost the same sensing performance. It is also sensitive enough to sense the pressure of a small piece of paper, and it can respond to pressures almost instantaneously.

The researchers attached the sensor to a soft robotic hand, which was then able to use it to take the pulse waveforms—the dynamic pressure pattern within each beating of pulse—from a human wrist. The results were published in Science Advances, and the researchers have filed a patent for the technology.

“This the first pressure sensor that can stretch and still maintain its high sensitivity and quick response rate,” said assistant professor Sihong Wang, who led the research. “It could potentially be important technology, both in the research community and in the healthcare industry.”

A special double-layer design
Creating pressure sensors that can work on soft robotics has been difficult, since the stretched skin of soft robotics could introduce lateral strain to the pressure sensor. This introduces another mechanical signal into the system, making it difficult to decouple pressure and strain into separate measurements.

Wang’s graduate student, Qi Su, led the development of a sensor that works through a new electrical double layer design. The outside layers are made up of stretchy, conductive nanoparticle paste and elastomer. Inside stand tiny micropyramids. When pressure is placed on the sensor, the micropyramids compress slightly, connecting with an electrode, which sends a signal about the pressure level.

The elastomer material makes the sensor inherently stretchy, but the researchers increased the stiffness at the bottom of each micropyramid, so even when the sensor is stretched and deformed, the micropyramids stay intact. In fact, even when the material is stretched up to 50 percent—the level of stretching generally needed on a human body—the sensor retained its high level of sensitivity. The sensor also proved to be robust, not losing any of its sensing capabilities after being stretched 500 times.

Incorporating sensors into robotics
The applications for a stretchable pressure sensor are wide-ranging, but Wang points to the recent COVID-19 pandemic as proof for their immediate need. Many people stuck at home were relegated to talking with their doctors through virtual telemedicine and couldn’t get the diagnostic or therapeutic care that they needed.

The sensor could also act as an electronic skin on a prosthesis. For example, a soft robotic prosthetic hand could ultimately sense the pressure its fingers feel when picking up an object.

Wang and his team are working to add multiple sensors to the robot hand—expanding them to multiple fingers and adding new sorts of sensors that can feel texture—and are beginning collaborations to design future prosthetic applications.
Read More
www.labmanager.com

Embedded sensors and intelligence on the new edge