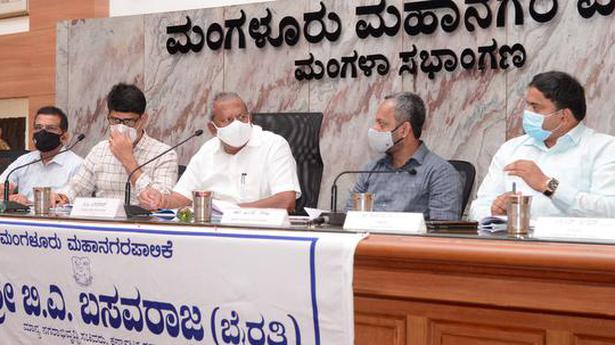 Minister for Urban Development B.A. Basavaraj on Tuesday asked Mangaluru City Corporation to explore the possibility of constructing satellite bus stations in the city if the move to develop a bus stand or transport hub for private buses at Pumpwell is not working out.

Earlier, Member of Legislative Council Manjunath Bhandary said that the project proposed at Pumpwell has not been found feasible and hence, an alternative move should be made.

The Minister said that as the project proposed at Pumpwell is expected to cost ₹460 crore, no investor is coming forward to take it up under public-private partnership model. He asked the corporation to discuss the matter with MLAs, MP and other representatives and proceed further.

Deputy Commissioner K.V. Rajendra said that notwithstanding the bids that were invited thrice, a bidder could not be selected.

The Minister was upset with the lack of cleanliness maintained in the city and delay in the implementation of projects by Mangaluru Smart City Ltd. and the KUIDFC.

He asked the city corporation to take up a ward-wise drive to maintain cleanliness. No garbage should be allowed to be dumped at public places. “Identify those who dump garbage at public places and file criminal cases against them,” the Minister said.

The Minister asked corporation Commissioner Askhy Sridhar to inspect the wards for cleanliness and take action against the health section officials concerned if they are found lethargic in discharging their duties.

Mr. Basavaraj asked MSCL to complete the road projects within three months and restore the roads that have been dug up leaving no debris on them.

He was upset when it was found that the KUIDFC has laid only 250 km of 1,388-km long pipeline network in the city under the Jala Siri Scheme estimated at ₹792 crore. At the same time, KUIDFC could build 13 of 19 overhead tanks under the scheme.

He was unhappy that MSCL could complete only 16 of the 63 road projects planned.

The Minister asked the authorities of KUIDFC and MSCL to cancel the contract of such bidders who have failed to complete the projects assigned to them, file criminal cases against them and award the projects to new contractors.

How can autonomous vehicles contribute to sustainable mobility planning?