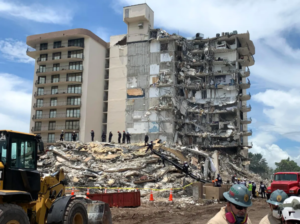 how-the-navy-seals-of-disaster-data-collection-are-helping-the-surfside-investigation
When Champlain Towers South, a 12-story beachfront condominium in the Miami suburb of Surfside, partially collapsed on the night of June 24, it was a disaster that no one expected. But one team, at least, was prepared for it.

Since 2018, the National Science Foundation’s Natural Hazards Reconnaissance Facility (known as the RAPID) has provided instrumentation, software, training, and support for research before, during, and after about 75 natural hazard and disaster events. Almost overnight, it can dispatch everything from iPads and cameras to a flock of sensor-packed drones or even a robotic hydrographic survey boat—as well as the expertise to use them.

In contrast to the public safety professionals who’ve deployed drones to determine the scope of the collapse and seek out survivors, the RAPID group looks for evidence of how and why buildings fall in the first place. And RAPID’s mission is equally time-critical.

“We are set up to rapidly enter a disaster zone and very quickly collect the data before it’s cleaned up as part of rescue and recovery,” says RAPID director Joe Wartman, a professor of Civil and Environmental Engineering at the University of Washington in Seattle, where RAPID is based. “In a sense, we’re the Navy SEALs of disaster data collection. We’re the only facility in the world that does this work.”
Read More
spectrum.ieee.org