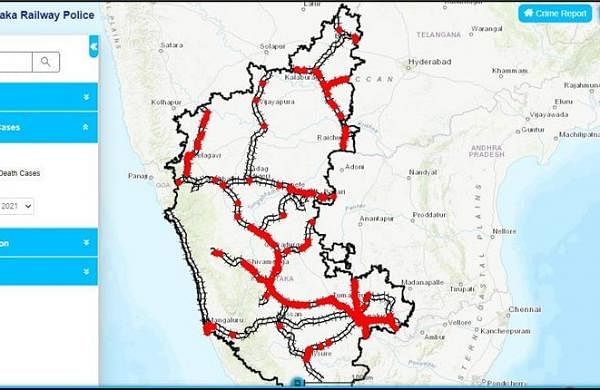 BENGALURU: The Government Railway Police (GRP) is making use of a novel system to ready Unnatural Death Reports (UDR) on railway tracks: an application developed by the Karnataka State Remote Sensing Applications Centre (KSCRAC) to capture all details of a deceased person with location accuracy and related geo-tagged photos.

This innovative usage of technology was initiated by Additional Director General of Police, Railways, South Western Railway Zone, Bhaskar Rao. It is now being utilised by railway cops on a full-fledged basis following the completion of trials that commenced in March this year.

Specifying details, Superintendent of Police, GRP, D R Siri Gowri told The New Indian Express, “The cops who visit the spot need to just log on to the Crime Location app provided on their phones. The exact location, latitude and longitude of the body and other minute details are captured. The data gets directly uploaded to the server used by the GRP.” There is a permanent record of it leaving no scope for any manipulation.

“Apart from better detection of the cause of deaths, the app can help Railways in reducing the claims amount being paid to families whose members lose their lives on railway tracks by rectifying the hotspot readings. There are occasions when murders are committed somewhere and the body dumped on the railway tracks and the exact capture can help us arrive at an understanding of the actual scenario,” she said.

The app used to take up to 90 minutes to complete the task earlier but it has been brought down to just ten minutes now, she added. It was initially utilised in Bengaluru but is now being used by GRP cops across Karnataka.

A S Rajashekhar, Group Head of KSRSAC, said this spatial mapping done by the map will help the Railways identify locations which are hotspots for suicides, accidents or murders and take preventive steps. “For instance, it helps record data of spots like unmanned crossings, under bridges or over bridges or railway platforms where fatalities are higher in number,” he said.