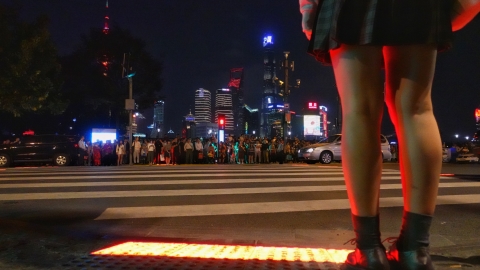 How does intelligent transportation change our lives?
The biggest headache for many people living in a metropolis is traffic. For example, in many Chinese cities, congestion is a common occurrence. Is there a way to crack it? Building more roads? Hiring more traffic police? Or auctioning the car plates?

The solution may lie in intelligent transportation.
Autonomous cars are not exposed to human error like distractions and cutting driving time. While the system takes over the controls, passengers are free to do whatever they want.

China has been taking the lead in testing and commercializing computer-assisted driving.

According to the Society of Automotive Engineers, Level 4 driving automation means the vehicles do not require human operation and are programmed to drive under certain conditions. The technology is usually used in public vehicles, such as driverless taxis and buses.

Tests with driverless taxis have been underway in many Chinese cities, including Beijing, Shanghai, Guangzhou and Shenzhen.

Tech giants, ride-hailing online platforms and traditional taxi companies all want a piece of the market.

Beijing approved commercial use of driverless taxi for the first time on November 25. The first user took a short ride of 2.1 kilometers and paid 1.24 yuan (19 US cents) after a discount.

Contactless cash: Ensuring that everyone is along for the ride

It’s time for rail companies to get smarter with data