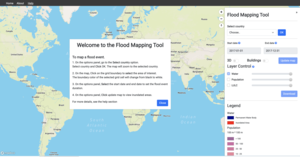 New UN tool maps floods since 1985 to street level, will aid disaster planning, especially in Global South
UN University-led experts have debuted a new tool that generates instant, accurate street-level resolution maps of floods worldwide since 1985. The free online World Flood Mapping Tool will help all countries but especially those in the Global South, where flood risk maps are rare and often badly out of date.

Created by the UN University’s Institute for Water, Environment and Health in Hamilton, Canada, with support from Google, MapBox and other partners listed below, the tool lets users adjust variables to help locate gaps in flood defences and responses, and to plan future development of all kinds — for example, where to build or upgrade infrastructure, or develop agriculture.

Simple to use, the tool, at https://floodmapping.inweh.unu.edu, requires only Internet access to obtain a flood map at 30-meter resolution — street by street level. An upcoming version for more commercial uses, for example by insurance firms, will offer even more precise building-level resolution.

The tool allows users to adjust variables to help locate gaps in flood defences and responses, and to plan future development of all kinds — for example, where to build or upgrade infrastructure, or develop agriculture.

Says UNU-INWEH Director Vladimir Smakhtin: “Floods in the past decade have impacted the lives of more than half a billion people, mainly in low and middle income countries, and resulted in damages of nearly US $500 billion — roughly equal to the GDP of Singapore. More recent floods worldwide have added to a fast growing toll of upended lives, damage and deaths.”

“An estimated 1.5 billion people — greater than the population of Europe — live at risk of exposure to intense flooding,” adds Dr. Smakhtin. “We need to prepare now for more intense and more frequent floods due to climate change and hope this tool will help developing nations in particular to see and mitigate the risks more clearly.”
Read More
www.eurekalert.org